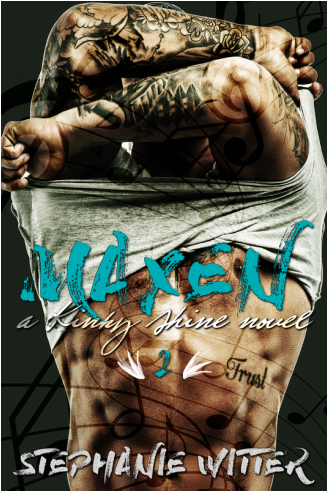 They were married but never kissed.
That night years ago never had consequences…until now.

“I wasn’t into the love bullshit and I didn’t really believe in forever between two people.’’

If I had my way, I would have never seen Maxen Walton again, the womanizing drummer of Kinky Shine.
When I met him in college he was already going through girls as if they were disposable. I had always hated him. Yet, for some drunken reason I ended up marrying him in Las Vegas. That night, right before I puked in the fake flowers and left the tacky chapel was the last time I had laid eyes on him.
Until my boyfriend asked me to marry him.
Now, I was in LA trying to get a divorce from my husband without the press hearing about it.
What I didn’t expect was that my famous husband affected me and that getting to know him would change a lot more than I ever planned.

“All I saw now was Lark, always and forever out of my reach, always driving me crazy.’’

I had only ever met one woman who equally drove me crazy and made me want her until I forgot my name.
Lark Hardin.
And I married her one crazy night in Las Vegas.
Freshly out of rehab and trying like hell to get back in the game while convincing my best friend I wouldn’t relapse, seeing my wife again was the last thing I needed for that.
Life liked f*cking with me, though.
Here she was, so sexy I would damn myself to be inside her just once, but she wasn’t here for me. She was here to get a divorce so her perfect boyfriend had free range to marry her.
She still hated my guts on the sole principle that I was a womanizing f*cker, but maybe she would open her eyes and see beyond that part of me.
I just hoped it wouldn’t be just for the sex because this woman had always been my weakness.
She had the power to destroy me.

“I’d spent the better part of my life hiding behind my bright smile and loud laugh, pushing everything away by using sex, but that was over.’’

*For readers over 18.
Can be read as a standalone but if you want the full Kinky Shineexperience don't miss the first book.*

ADD IT TO GOODREADS

What readers are saying...

"I just could not put this down. I fell in love with both of them and even when I couldn't keep my eyes open I still kept reading. Now I need to go back to read Dex." — Louise

"Stephanie Witter surpassed my expectations with Maxen. (...) Stephanie Witter has written this story beautifully, as the layers slowly begin to be removed you can sense that both characters have more than just an attraction towards each other…..they have a chemistry, that seems to elude them both." — Written In Red Book Blog

"The plot was well thought out and beautifully written, and I was drawn into Maxen and Lark’s story. (...) This is an emotional read and steamy, I enjoyed it very much and would highly recommend it as a sexy read!" — Julie

"The Kinky Shine series just keeps getting better. Ms. Witter has given us yet again another rock romance that you can’t put down." — Doris

"This book was such a fun read. Learning about these characters and their friends left me wanting more." — Can't Quit Books

“To be completely honest, I was not prepared to love this book as much as I did! Stephanie Witter has captured real and engaging characters, the fact that they play music for a living is secondary to the bond and humor they share. Hysterical dialogs, confessions, intrusive press, worried parents, conniving parents, and the fact that passion can only be masked for just so long, make this a non-stop read." — Victoria

"This series is perfect! The Kinky Shine books (so far) are packed with love/hate relationships, tension (the good kind), humor, and of course the sexy times (hot damn). These books are such fun reads you don't even realize how long you can read them, you know, one of those accidental 3am ends. Whoops!" — Jen's Late Night Reviews

"I need more Kinky Shine stat! After reading Maxen, Ms. Witter has made herself a spot at the top of my list for authors to follow! That's how good it is!" — Book Fancy

"Maxen and Lark together are nothing less than fireworks. Whether they are arguing or making out, sparks are flying. Together, they are HOT! (...) This book is exciting, and surprising, and everything I want from a Rocker romance. I loved this book just as much as Dex's book, and I can't wait for the next in the series!" — Jennifer